Wildlife Artist of the Year 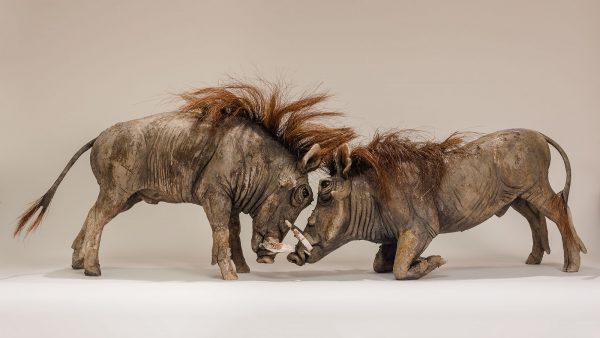 After winning the David Shepherd Wildlife Foundation (DWSF) Wildlife Artist of the Year in 2015 I was delighted to accept the opportunity to be a judge and guest artist for this year’s competition. Most of the animal sculptures I have chosen to feature in the exhibition are those that DSWF aims to protect and conserve: the tiger, moon bear, elephant and wild dog.

In addition, I felt it was only right to include some warthog sculptures (shown at the top of this post) after winning the competition with a warthog sculpture last year. The Tussle depicts the moment in the warthog community when an adult male is trying to root around but a young upstart keeps pestering him. The adult warthog is having none of this and despatches the young upstart with a few carefully chosen nudges of his head, leaving him free to carry on the important business of rooting.

The moon bear sculpture To feel the Sun on my Face was inspired by the amazing work of Animals Asia, a charity supported by DSWF which works tirelessly to rescue bears incarcerated into the bear bile farming industry in China and Vietnam. The charity rescues and rehabilitates the animals in their wonderful bear sanctuaries. Education and public awareness are an essential component of Animals Asia’s work, as this is the only way to bring about a lasting change in attitudes. 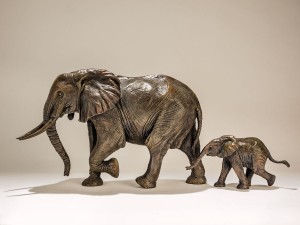 Also included in the exhibition are two bronze animal sculptures. Follow Me, depicting a female elephant and her baby, explores the touching bond between mother and child. It has a traditional patina and is available to order in a limited edition of just nine pieces, one of which will be available to buy at the exhibition.

My latest bronze sculpture Raj at Rest captures the elegance and majesty of a tiger at rest, lying on a branch surveying his kingdom. Tigers are such graceful animals and I have tried to use the shape and form of the sculpture to convey these qualities in the final piece. Raj at Rest is available to buy in a limited edition of 12 pieces. A full portfolio of images is available to view on the sales page.

Last but not least, no Wildlife Artist of the Year display would be complete without my favourite animal, the wild dog. I have sculpted many wild dogs over the years, but this piece was inspired by an itch! On a previous wildlife trip I had watched with amusement as an alfa female tended to an itch. Sitting with one ear pointing to the sky, this was surely the most urgent itch I’d ever seen in an animal! Wild Dog Triptych (pictured below), so named by one of my Facebook followers, explores this distinctive behaviour.

The Wildlife Artist of the Year exhibition will be held at the Mall Galleries in London and is open to the public from Tuesday 28 June until Saturday 2 July. The private view and prize giving will take place at a special ceremony (by invitation only) on Monday 27 June. Full details can be found on the DSWF website. 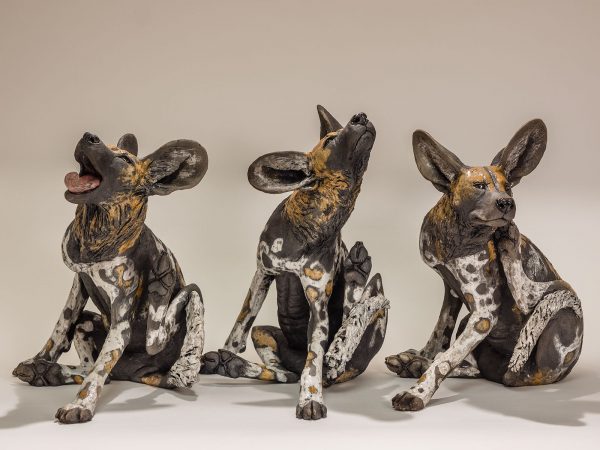 Nick Mackman's animal sculptures have been widely exhibited and are held in private collections all over the world. In 2015 she won the David Shepherd Wildlife Foundation (DSWF) Wildlife Artist of the Year competition. She has undertaken commissions for British Airways and the BBC Wildlife Photographer of the Year competition. Her work is prized for its wonderful characterisation and individuality. Contact us to find out about commissioning your own animal sculpture or signup to our newsletter for advance information of new releases, exhibitions, workshops and more.

Commission an animal sculpture and receive regular photo updates, giving you a unique input into the creative process. Contact us for full details and pricing.

Sign up for Nick's newsletter and get the inside track on new releases, exhibitions, workshops and more. Unsubscribe at any time.

You can find out more about which cookies we are using or switch them off in settings.

This website uses cookies so that we can provide you with the best user experience possible. Cookie information is stored in your browser and performs functions such as recognising you when you return to our website and helping our team to understand which sections of the website you find most interesting and useful.

Strictly Necessary Cookie should be enabled at all times so that we can save your preferences for cookie settings.

If you disable this cookie, we will not be able to save your preferences. This means that every time you visit this website you will need to enable or disable cookies again.